Gerard Berreby’s homage to his friend Ralph Rumney, whom he visited regularly in his Manosque apartment while the two of them collaborated on Le Consul (Paris: Allia, October 1999). Once, then-bedridden Rumney asked for a small sum of money, and Berreby complied. In return, he received a small handwritten note with the following text: The cheque is not the money.

As Berreby notes, Rumney’s text is a clever allusion to Marcel Duchamp’s Tzanck Check in 1919: Out of money, Duchamp offered to pay his dentist with a handwritten check, stamped by him – a unique piece of art. The note also alludes to Korzybski’s celebrated The Map is not the Territory.

More than fifteen years later, Berreby  chose to enlarge the note and create a limited edition print.  It is available at http://editionsdusalon.com/047-g_berreby-R_rumney_the-cheque_salondusalon.htm 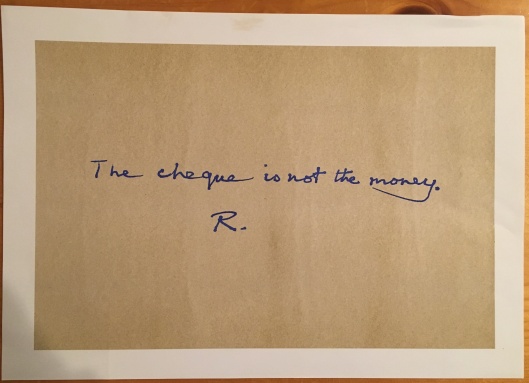