One of the lesser known members of the Internationale Situationniste, Patrick Cheval was born February 9, 1947. He was invited to officially join the movement in the summer of 1968. Cheval had distinguished himself as a key member of the “Enrages” (which resulted in his getting expelled from University of Nanterre’s housing in January 1968) and “Conseil pour les Maintien des Occupations (CMDO)” during the May 1968 riots. During his time in the S..I, he didn’t write much but he did beat up a few people when Debord asked him to (see, for instance, Corr Vol IV, p.28), faked a mental illness to avoid conscription (Corr. Vol IV, p. 91), and got jailed in a Moroccan prison. He resigned from the SI on 22 January 1970, but remained on good terms with the remaining situationists. In la Veritable Scission, Debord writes that Cheval is an “esteemed comrade” (1972), though he laments 3 years later that he’s not been up to much (“il ne fait rien”). In a letter to Jean-Francois Martos dated 16 May 1982, Debord asks Martos to send Cheval his wishes (“Transmet a Patrick notre affectueux souvenir. Il faut qu’il vive et qu’il boive” – Corr. Vol VI, p.213). As he explains with humor in this “Curriculum Vitae”, Cheval spent his adult life jumping from one menial job to another. He passed away on February 5, 1991, at the age of 44.

If you additional insights on the life, deeds, and writings of Patrick Cheval, please comment below or reach out directly. 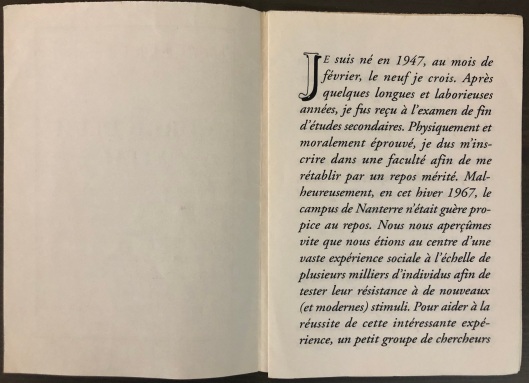 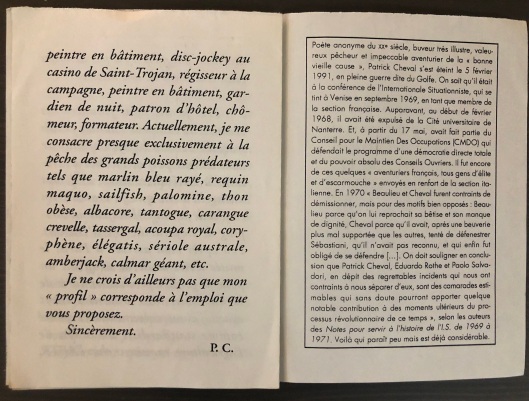