Postcard designed by French postcard maker Louis Buffier featuring a colorized photograph of the famous “Ne travaillez jamais” (Never Work) graffito, for which Debord claims ownership. The slogan was scrawled on a wall on the Rue de Seine in Paris, likely in 1952. The young Debord was possibly influenced by Rimbaud, who wrote in his poem Vierge Folle: “Jamais, jamais je ne travaillerai” (Never, I shall never work). On the bottom-left corner,  Buffier added the text “Les Conseils Superflus” (which can translate as “commonsense advice”).

Debord would reprint a photograph of the graffito in issue no.8 of Internationale Situationniste in January 1963. A few months later, he received a letter from the Cercle de la Librairie demanding a payment because of copyright infringement. In his response (found here in translation), Debord clarified that he was the author of the graffito, and sought to understand why the publisher had stolen his work. He received no response to his letter.

We locate a copy at Johns Hopkins University 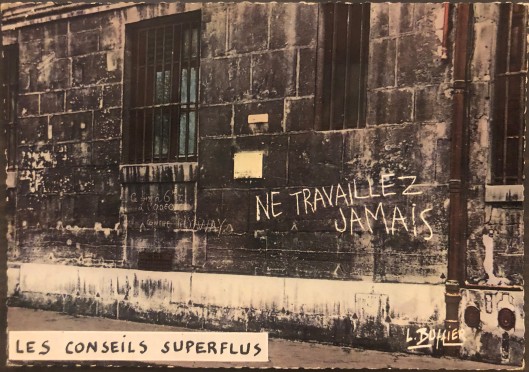