The “Declaration des ‘Editions Champ Libre’ “, which first appeared as a half-page ad in issue 9669 (24 February 1976) of Le Monde, was written in the aftermath of Gianfranco Sanguinetti’s arrest and expulsion at the French border on 11 February 1976. In a letter to Jaime Semprun, Debord states that he is the author of this text: “Tu as très justement reconnu mon style dans le communiqué sur la dernière aventure frontalière de Sanguinetti, et parfois ailleurs” (Letter to Jaime Semprun, 26 Dec. 1976 — reproduced in DEBORD, Guy. Correspondance Vol 5, p. 396).

The Declaration appears on the back cover of Correspondance des Editions Champ Libre. Volume 1 (October 1978). It is also reproduced in Guy Debord’s Oeuvres (p. 1316). Online version available here: http://debordiana.chez.com/francais/preuves.htm and in translation at https://libcom.org/library/declaration-editions-champ-libre

We locate a copy at Yale’s Beinecke Library as part of the Gianfranco Sanguinetti papers (binder 15bis, box 23)

The full text, in translation, is reproduced below

Gianfranco Sanguinetti, Italian, author of a Truthful Report on the Last Chances to Save Capitalism in Italy, the [French] translation of which Editions Champ Libre published on 8 January [1976], having presented himself at the French border on 11 February, was turned back due to the application of a “refusal of stay” decision taken on 21 July 1971 by Marcellin, the Minister of the Interior. We know that this kind of administrative manifestation of national security requires no judicial approval, cannot be appealed and thus is permanent. Even though the political regimes in Europe want to make small changes in their continuity, this naturally does not have any bearing on those who contest all of those regimes equally.

We are modestly aware of the fact that it is only fair to have recourse to advertising to put before the eyes of the reader – at every instant occupied with so much other pertinent and important news that is constantly of universal relevance and that concerns him personally – a simple, particular phenomenon that can only interest a few private individuals.

In fact, we do not have the presumptuousness to insinuate that the critique of capitalism could at all concern our contemporaries, their work, their ways of making a living, their ideas or their pleasures. We do not ignore the facts that, even as a subject for scholarly discussion limited to a small number of experts, the very justness of the concept of that critique has been controversial and that capitalism, as a hypothesis, is no longer of contemporary interest, because the Thought of Vincennes – at which the best-recycled professors have decided upon the dissolution of history and the prohibition of the criteria of truthfulness in discourse, which is something that is very rich in consequences for them – recently leapt beyond it.

Furthermore, we are not assured that, somewhere, there really exists a geographical (and an economically quite weak) entity called Italy. And, where Italy’s economy is concerned, the eminent leaders of the Common Market – even if the principle of the free circulation of commodities is as much their affair as the free circulation of people – have other reasons to doubt its existence.

The actual existence of Gianfranco Sanguinetti himself – either as the author of a Western samizdat or as the target of some liberal-advanced Gulag – is highly questionable. If we, on the unique basis of the magnitude of a public rumor (which also remains outside of our borders), allow ourselves to positively affirm the reality of his existence, his writings and the diverse and harmless police persecutions that have followed from them, one could retort that no one here in France has ever heard of him, and we [as his publisher] feel all the weight of such an objection.

We will also frankly state that we know a number of estimable people who, working for the newspapers or the distributors of books, do not hide the fact that they have been led to conclude that Editions Champ Libre also does not exist, and, for our part, we do not pretend to have the boldness to settle such an obscure question and thus go against the honest convictions of so many competent people by basing ourselves only upon our contingent desires and limited personal interests.

Given all this, we nevertheless will not allow ourselves to leave open the question of knowing if the world in which we live – the world of which you read all the most up-to-date news every day – truly exists. We are in a position to be assured that, for the moment, it still does. 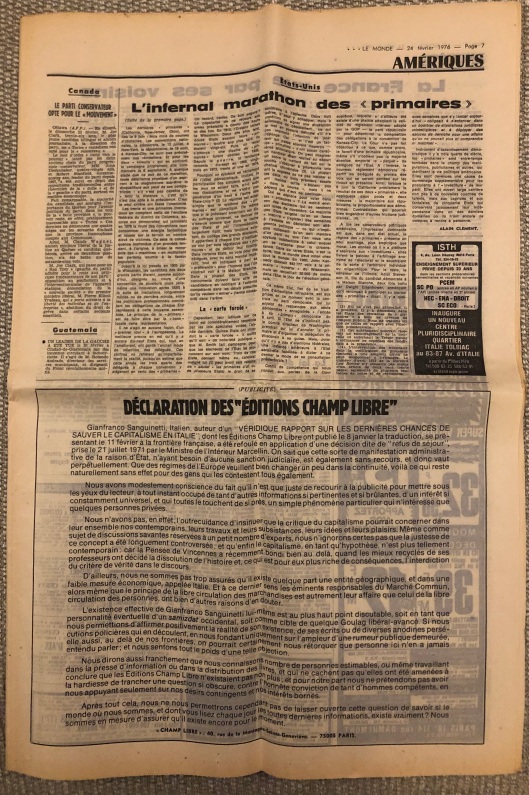 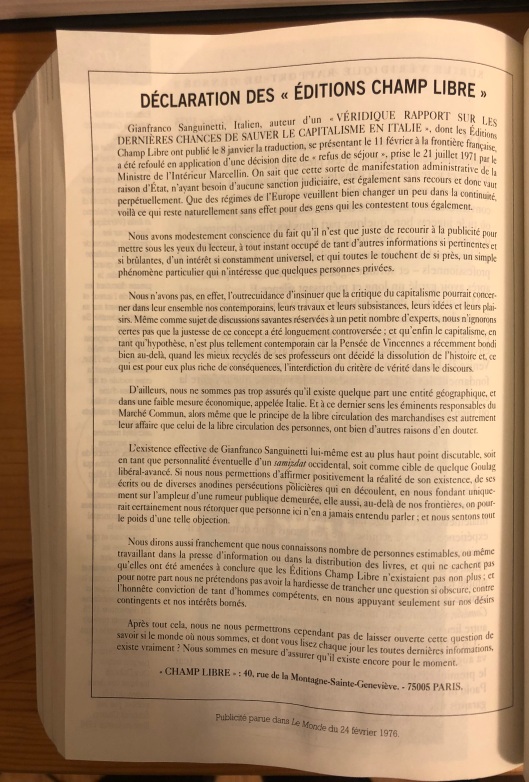 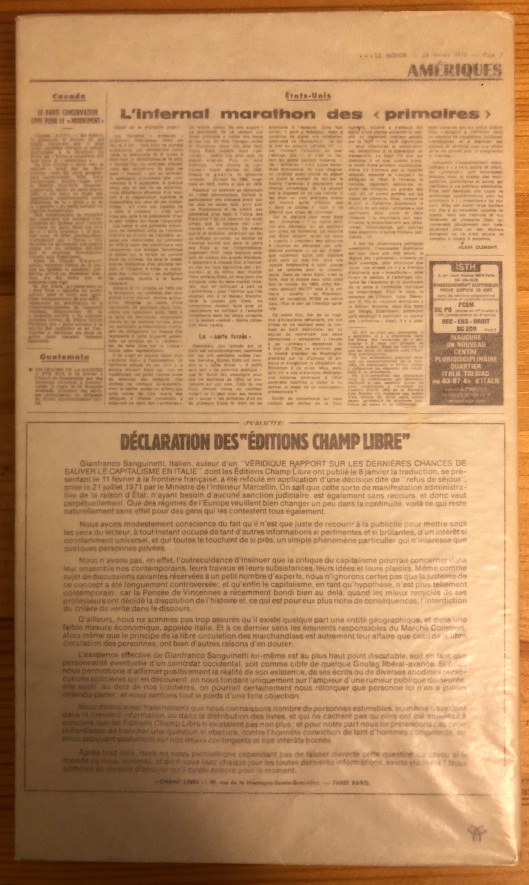